Monday morning came like it always had and I was tired and sore from Saturday’s work with the little mustang. I fed and watered horses and rode the customers horses first before I had time to work with him. I noticed little differences in the domestic horses that I hadn’t quite seen before working with a mustang. He really did have a good nature and intelligence that I hadn’t yet seen in a horse up to this point in my life. This also got my thinking about what I would name him. I wasn’t ever good with names and I preferred to give horses the same generic nicknames by how they behaved when I worked them. I would have to try harder for this special mustang and the name would definitely have to carry some history. 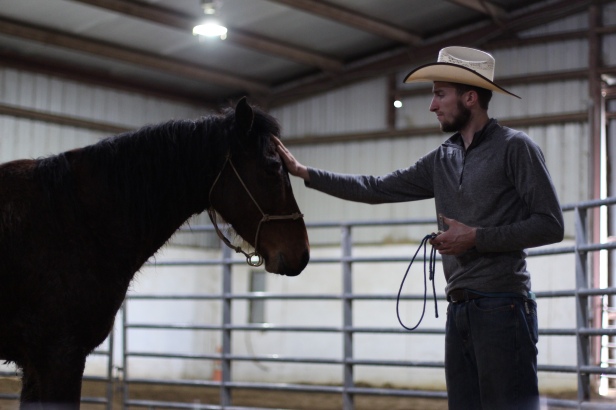 A little after lunch I was able to get to work with him. At first I thought he had forgot all of Saturday’s training as he reared and pulled away not wanting to go through the gate into the round pen. After a second or two, I remembered that he liked a scratch behind the ears and soon enough he followed me into the pen. I left him alone to clear his mind before we began working and I cleared my mind from the day’s work as I prepared for the task at hand. Saying a small prayer to myself as I began moving his feet I waited to see where the session would go.

He really had remembered almost everything and I was slightly worried that he was too good to be true. He made a few good mistakes though that gave me some relief that I wasn’t dealing with a perfect horse. When a horse makes mistakes it makes the process more interesting, too often we find ways to critique an imperfect horse when all they are doing is giving us opportunities to learn how to work through them. Every time he would try something that I wasn’t asking for I would search through my mind from all the years of my experience, from all the Horsemen I had ever learned, from all the books I had ever read. When I found an answer for his question I would move onto the next exercise. He really like being very close to me and I could only imagine it was from his growing up in close contact in a herd. Sometimes he would push into me and I would just stay out of his way without making it a huge deal. After all he was just beginning and we were only in the first week of work. 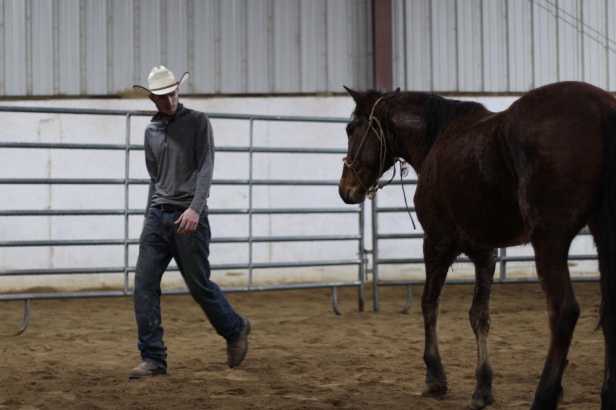 I asked him up to a lope from the ground with the surcingle and the saddle as well. He did great and when I say great, it was a stellar first saddling. He balled up for a second but then he found his confidence and moved his feet comfortably. I couldn’t have been more happy with his first saddling. Later I got on him and he sat quiet and waited for me, this horse was doing things I had not planned in the first week. Taking them all in stride, he had blown away my expectations and given me trust that I couldn’t have possibly dreamt of in a million years. I slipped out of the saddle and untacked him quietly, giving him a much deserved break.

His first steps moving around the pen were calm and reserved. I could tell he wasn’t as thrilled with moving faster so we went at just a walk and he obliged willingly. I gathered the reins and turned his head from one way to the next and he picked up those cues fast as well. Was there anything this horse couldn’t do? I wasn’t willing to push him to find out. We would have to wait till I was very confident that he was capable before I asked for more. This mustang was going to be going places..

Here is the video documenting day 2 and 3 of training.

6 thoughts on “Day 2 and 3 Training a Wild Horse: The Extreme Mustang Makeover 2018”